What Hotels Need to Know About Wireless Charging

Hotel guests commonly bring multiple devices with them during their stay. However, many hotel environments don’t provide easy access to charging outlets. This situation can lead to a guest feeling more than inconvenienced. A recent survey found almost 90% of people “felt panic” when their phone battery dropped to 20 percent or below.

This fear of a depleted battery and nowhere to recharge has led to the growing popularity of wireless charging — a technology that allows smartphones to be charged, without needing to be plugged in. 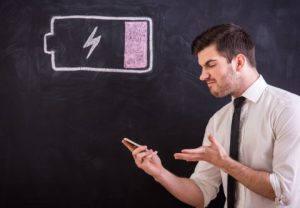 So where exactly is wireless charging heading, why do hotels need to be aware of it, and will it become a standard expectation of tomorrow’s hotel guest?

Wireless charging isn’t exactly new. The basic technology has actually been around for over a hundred years. However, it’s only started to become more readily available as modern smartphones have started to support it.

There are multiple industry standards, but the most popular wireless charging technology comes from Qi (pronounced “chee”). Not only is QI supported by numerous Android devices (including Samsung, Sony, LG, HTC and Huawei), but it’s also now supported by Apple’s new iPhone 8 and iPhone X.

The fact that Apple has adopted Qi is hugely significant, and almost certainly means that QI will be the leading industry standard moving forward.

Where is Wireless Charging Heading?

Wireless charging has started appearing in thousands of public spaces around the world, including restaurants, high street coffee shops, and sports stadiums. Starbucks and McDonald’s have also introduced the technology in select stores, and companies such as Ikea have built Qi chargers into their furniture.

Wireless charging has also become more commonplace in airports and travel lounges. In 2012, Virgin partnered with Nokia to install the Fatboy Recharge Pillows in its Heathrow Airport lounges. 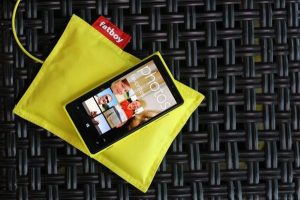 As consumers start to see wireless charging appear more often in the places where they live, work, and socialise, they’ll reasonably expect it to be available in hotels too. This in turn may well drive widespread industry adoption. With that in mind, it’s worth considering some of the specific benefits this could create.

The Benefits of Wireless Charging to Hotel Guests

The obvious benefit of wireless charging is that guests will be able to use charging pads or clocks in the hotel room, saving them the hassle of bringing their own charging cables. Overseas guests will also be spared from having to bring travel adaptors with them.

However, wireless charging doesn’t have to be restricted to in-room charging pads. The technology can also be integrated into alarm clocks, chairs and desks. This opens up the option for the technology to exist in hotel lobbies, club lounges, food and beverage outlets and function areas. Seamless charging throughout a hotel will mean guests’ can recharge on the move, without being tethered to their room.

In addition to added convenience for guests, the Qi wireless standard can also directly benefit the hotel. 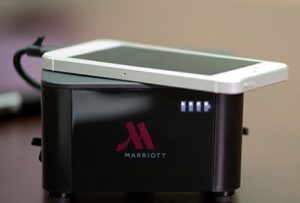 There are some solutions available that use Bluetooth beacon technology integrated into the wireless charger to allow for continuous, real time monitoring and data analytics for each individual charger. This helps monitor success, optimise the placement of units and provide useful diagnostic information. The Bluetooth beacon technology also allows the hotel to interact with the guest in real time, using the wireless charger via opt in intelligent push notifications.

The Future of Wireless Charging

Just as free Wi-Fi has become an expectation, wireless charging will be regarded as an essential hotel extra in the very near future.

The wireless charging market is predicted to be worth $37.2 Billion by 2022, increasing at a Compound Annual Growth Rate of 44.7% between 2016-2022. As most smartphones now support the technology, it seems inevitable that it’ll become ubiquitous in our daily lives.

It’s true that wireless charging adoption in the hotel industry is still limited, but that fact indicates a golden opportunity for tech-savvy hotels to adopt the technology now in order differentiate themselves from their competition and offer a bonus that more and more guests will be looking for.

This entry was posted in AI technology, Artificial Intelligence, Hotel Technology, technology and tagged a functional hotel room, Ability to Connect Devices, Artificial Intelligence, business and leisure guests work from their hotel room, Connectivity panel, Guests want adequate and accessible transformer friendly power outlets in a hotel room, hotel at work, The job of hotel in room technology has changed, What do guests want when it comes to Hotel Internet Access, What hotel guest's want, Why Are More Of My Guests Demanding Wireless, wireless internet, work environment. Bookmark the permalink.